The road to Pompeii

The road to Pompeii

Happy to leave Rome we left it via the Via Appia, the road that the Romans took when they crossed the country over to Brindisi on the east coast. The Via Appia in our eyes is one of the secret gems of Rome. Most touristic attractions are completely overrun with people and here there are not too many people to be seen. It did give us a bit of a bumpy ride. We were following Eurovelo 7 a cycling route out of Rome as our road to pompeii. We however don’t really think it is used as a cycling track. Part of it had a lot of glass, we were directed to cross a field and were cycling on really busy roads. Photos from Rome to Pompei

The glass and the busy roads made for our first puncture when Susanne banged down in a hole on the road. It was flat in two seconds so we made our way of the road and found a safe place to switch the inner tube. We had decided to only cycle 30 or 40 km out of Rome because Martin hadn’t recovered fully but a camping place was very difficult. We ended up at a small wine farmer where we could camp in the garden. His son had backpacked through South America last year and came over to have a chat with us. We were given a bottle of wine and the next morning coffee which was nice.

The following day there were a lot of cyclists on the road which was fun because they all say hello and cheer us on. We also made it to the Mediterranean for the first time. We followed roads along the coast and the weather was quite fine. In these outskirt areas, as we had also seen the day before, there are a lot of prostitutes next to the road with short skirts or pants where the underwear shines through. This is quite a surprise when we are on the bicycle. We made it too Sabaudia and the Circeo National Park but a camping place was difficult. We wanted to stay at a camping but they were still closed for the season to begin. Eventually we asked a private property at lake Paola and it was okay to stay there. It was really the most beautiful place until now. We were not alone. An hour after we had set up our tent a scouting group joined us which we had seen previously on the road.

From then on the weather turned grey on us which made the moral a little but low. The roads were not so interesting, Martin was annoyed with his energy levels, the sky was grey and sometimes raining and most villages we passed through were empty because of the season. There really are ghost towns where nothing happens. A small highlight was the city Sperlonga with an interesting city centre with white houses, which gave us a boost. Finding a place to camp has been quite hard so one time we ended up in a side city of Napels next to a heap of sand where digging work was going on. Oh well, we just need a place to sleep.

We decided to pass by on Napels because the big Italian cities are not doing it for us at the moment and because it was raining again we cycled past Mount Vesuvius. We decided to stay at a camping (the first one to be open!) in Pompeii because it was raining and this would give us some rest and maybe visit it the next day. The next day we were up for visiting Pompeii and getting into 2000 year old culture. We were again amazed by the amount of tourists but were able to escape them by going off the beaten track a little. It was even the first experience for Susanne to eat fresh peas from the plant.

Pompeii was highly interesting, we saw a lot of old excavated buildings, roads, paintings, columns rising to the sky, green fields, pots, baths and stoned people as in people that has been turned in to stone. It is hard to describe what we have seen and give the exact feeling in words. We actually were also a little bit more interested in daily life, furniture and how it looked like then. A lot is very well preserved and it is so good to see that it is well kept but we were yearning for more about how life was like back then. See all photos from Pompei

Today we had decided to go bicycling towards the Amalfi coast. Yet it rained all night and during the morning. The most rain we have had until now. So we have decided to stay in our tent. We have been unsure about this decision all day, because we also like ‘using’ our days, but just now there was an half an hour hail storm, so we think we made the right decision. A French guy at the camping just said ‘soleil’ is being expected for tomorrow so let’s keep our fingers crossed.

Stay put as we cross over to the east coast to Mola di Bari for ten days of a helpx experience at an organic farm stay. 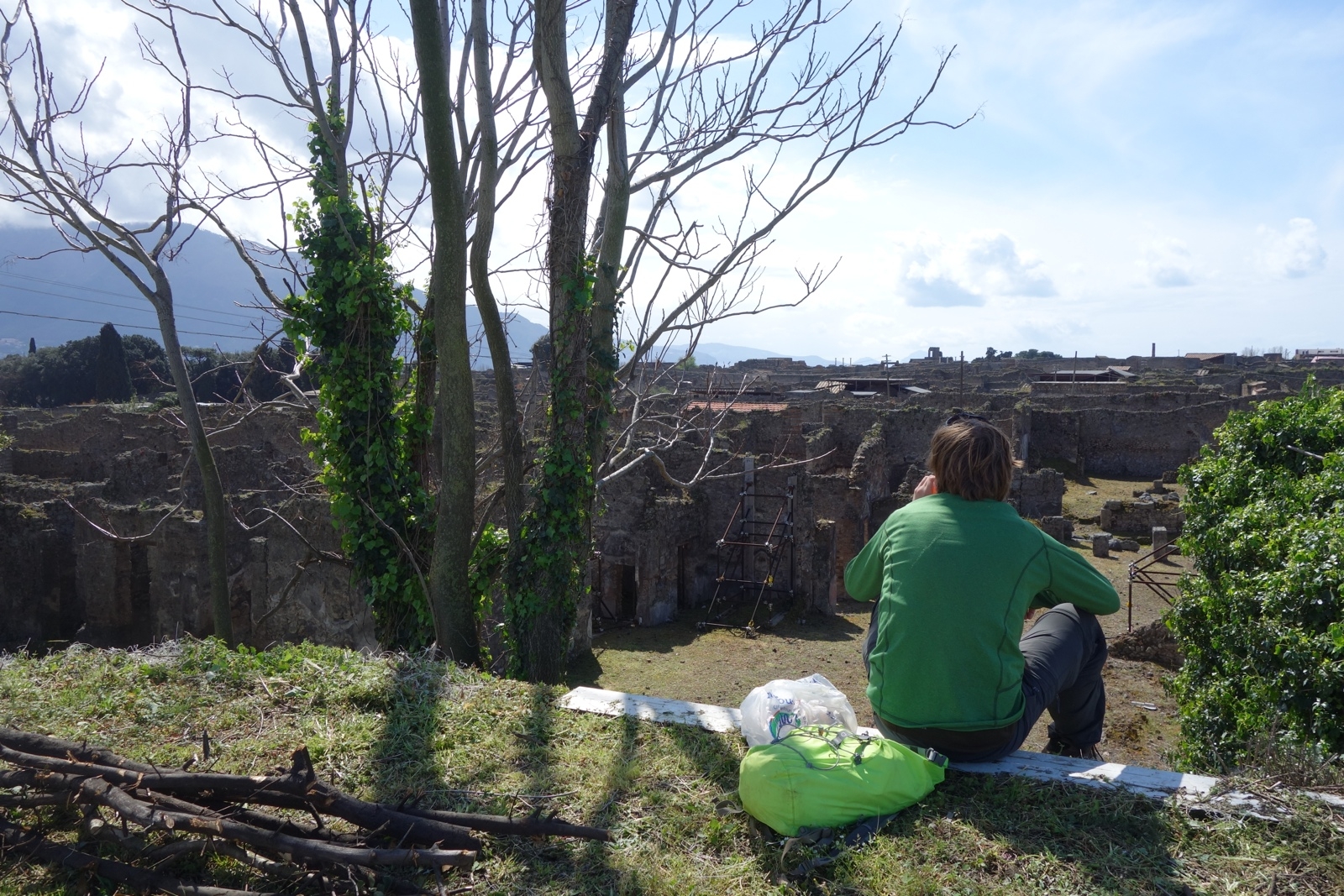