The good thing with a country like Italy is that it is fairly short to travel from one coast to the other. We had researched what would be the easiest way but couldn’t really find the right answer on Southern Italy, cycling coast to coast. The route we had chosen also was partly used by cycling holiday companies for speed cyclists. Possibly that might have been a warning for what was about to come.

We had discussed if we were going to visit the Amalfi coast or not. It was not really in the right direction but it was appealing and otherwise we had to cross some mountains down to Salerno. So we opted to do it and even cycled the whole peninsula up to Termini on the tip. These areas, where it is touristy, only one major road and many closed gates to houses make for some difficult camping opportunities. We had cycled way further we had planned to and were just outside of  Amalfi when the sun was going down. We cycled a little further and in Atrani drove out to the shore where local fishermen were fishing. We could camp in a dark corner. We decided to cook first to see what the atmosphere was like and soon found out we were standing next to their toilet. A very concentrated urine smell bothered us while making dinner and the attitude of the fishermen didn’t suit us. So what then… Not a lot of alternatives left. Opt for a hotel? Or maybe first ask at the pizzeria…. We did and we could set-up camp in their alcove with the warning that we might be bothered by young local boys as it was friday night. We heard some shouting during the night but for the rest it was a perfect place with a nice view and warm sun in the morning.

We left the Amalfi coast at Salerno and cycled inland next to an ugly coastline and flat ugly streets. We actually had quite a diverse day because after lunch we slowly started to climb up the hill and into some rolling hills. We ended the day with a nice downhill close to Contursi Terme. We were pleased to find an easy camp spot next to a river, the down side was the smell of sulfur, or rotten eggs if you prefer and the not so flat space for the tent so Martin was rolling down on top of Susanne and did not sleep so relaxed.

When we enjoy the most we forget the hard times!

We knew the next day would bring at least one pass, but eventually it brought two. In the morning we made it up to around 700 meters and came to a pass with a great view of a lake and villages on hilltops. We then stayed at that height and slowly descended, which made for a nice pace. We then had 15 kilometers of ugly road with high traffic and at around four o’clock we were at the foot of the hill on which Laghi di Monticchio lies. We decided to do this pass and see if we maybe could find a camping at the lake as the map suggested. We had already cycled 70 km with a pass and did not know what this uphill had in store for us. It was steep and hot and very steep. As snails we both crawled up with a few stops on the way. Almost at the top we ate some grainy cookies for extra energy and we made it to the lake (which was actually not as nice as expected). The camping was open but wanted to charge us 15 euro without shower, which we didn’t do. Suus was getting nervous because she was tired from the day and didn’t want to climb uphill anymore, which was necessary to leave the lake on the other side. We went for a drink at a local shop and suddenly he asked where we were sleeping and offered us his car park where we could set up the tent. He spoke some German so it was a bit easier to communicate with him. When we were making dinner he came over and offered us a grilled panini with wild boar meet. We chatted and talked about the Italian system, politics and poetry. It was a great feeling to be so welcomed by him.

The last day before we would reach the coast and our Help-x project had come. We had enough time to cycle there and take it easy as most was downhill cycling. We visited quant little villages  Altamura, Cassano, Acquaviva, Casamassima and Rutigliano. There was some traffic on the roads but never to wild and the road to Rutigliano was nice and small winding through fields with apple trees, vineyards and cherry blossoms. Martin is very much inspired by the amount of nice stone in this area which us used for walls or in the fields. We made it to Mola di Bari where we were welcomed and we will tell more about our project, working on a straw bale school, very soon. 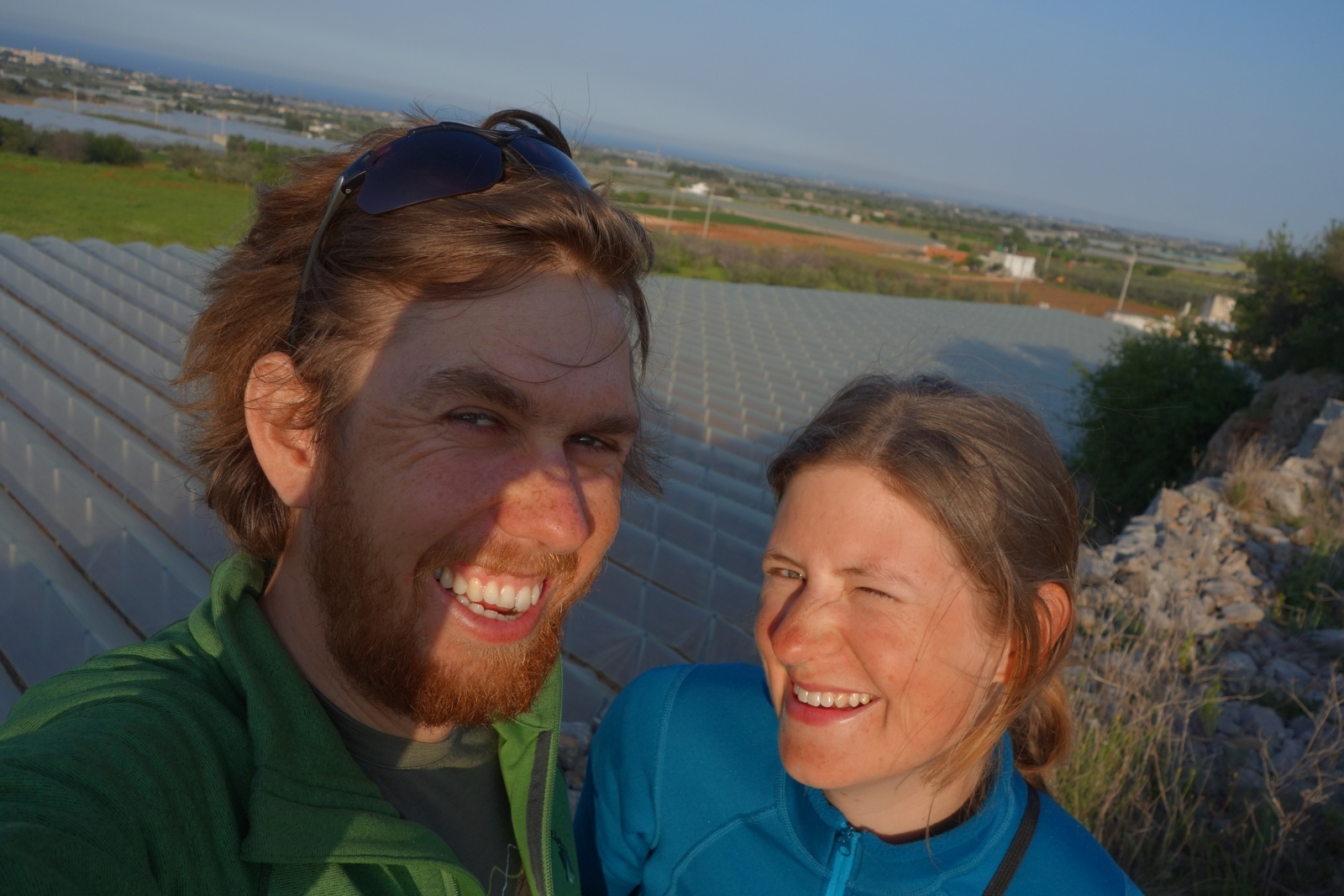