Before setting off on our journey we have had multiple conversations what we wanted to do on this trip. We have spoken a lot about that it should not only be about the cycling and that we sometimes want to go all in on a project, indulge in a culture or spend more time in one place.

We have been searching to find a project in the south of Italy because we found it quite hard to get into contact with Italians and maybe this way we could get closer to the Italian culture and get our hands dirty. Through www.helpx.net we contacted a place in Mola di Bari, after being inspired by the following host information:

Hello people of good will, my name is ANDREA NAVACH. I teach Italian Literature, History and Geography in public school (age 11-18) and I live in a big country-house with my dad, my girlfriend ANGELA IURILLI and my 5-year old daughter FARA (My mom died two years ago, not before having taught me how to be a good host!). I believe in Permaculture, and I am really interested in designing solutions for a self sufficient way of life. We are always, always in need of help, but you need to check with us if there is a room available!

We are building a STRAW BALE HOUSE (Casa di paglia). The eco-building is on our land and our dream is to open a free democratic school (check www.eudec.org to find out more) for children above the age of 3. There is much to do in building a house, and if you like, you can try your best with mud, straw, wood and lime. Please, come and help us building our dream!

Write us a message and we’ll be in touch.

[I apologize if I can’t reply to all, I promise I do my best, but I am still not a good Internaut…)

They sent us a short message in return that we were welcome and two weeks later, just before we arrived, we also heard that an English helper was staying and helping. We didn’t know what we were going to do, but were open for this new experience.

When we arrived we soon realized that we were going to get dirty 🙂 We were welcomed by Anna, the English helper, and six dogs and showed around the beautiful place. It is on top of a hill with a view of the ocean four kilometers east. There was a lot going on: dogs (Clandestina, Bobby, Toto and Lolita) chickens, rabbits, turtles, veggies, edible plants and of course the straw bale school that was being built.

We didn’t know at which stage the project was before we arrived. It had already been running for 18 months. The foundation and walls were all ready, windows were done and it looked great and earthy. We could help out with plastering the final layer in the bathroom and in the classroom. The classroom had one huge wall that had to be done in one piece so it was good that we could team up together to do this. It was fun to work together with Anna, who had been working there for almost two months together with her dogs Perrita and Sally. She learned us the tricks from the trade and we could help each other out, she also keeps a blog of her travels Anna’s Travels.

We have learnt how to make plaster by mixing mud, lime, sand and straw, stir and prepare mud, strip straw, throw plaster mix at the wall, massaging the mix, smoothing it out and caring for the walls and pressing them the day(s) after. Also we learnt about composting, eating vegetarian (our longest stretch of vegetarian food ever) and how it is to live with a less traditional Italian family. We worked for four hours, six days a week and the work was quite physical. It was really nice to see the results and progress made.

Andrea, Angela and Fara were very nice and great hosts. Andrea is a teacher and Angela is an actress. They introduced us to the world of straw building and gave more information about permaculture. They have a busy life working, running the family, taking care of the country-house, the school and there land and being involved at the Ex Caserma Rossana. This is an old military base in the middle of Bari which hadn’t been in use for twenty years and was squatted by a group of people since the beginning of February. Andrea is starting up a free school project there and there are lots of creative initiatives rising. On our last day in Italy we went there to have a look and it is quite an impressive area. They are also making a garden project and introducing permaculture aspects.

All in all we have had a nice two weeks in Mola di Bari where we have learned different things and been active in a different way then biking. Also it was nice to settle for a short period, do our laundry, talk with people and have meaningful conversations. It was good to leave Italy in a positive way.

By now we have left Italy with the ferry to Durres in Albania, we slept outside on the deck under a bright starry sky rocking backwards and forwards and have arrived in a whole different world. More about that later! 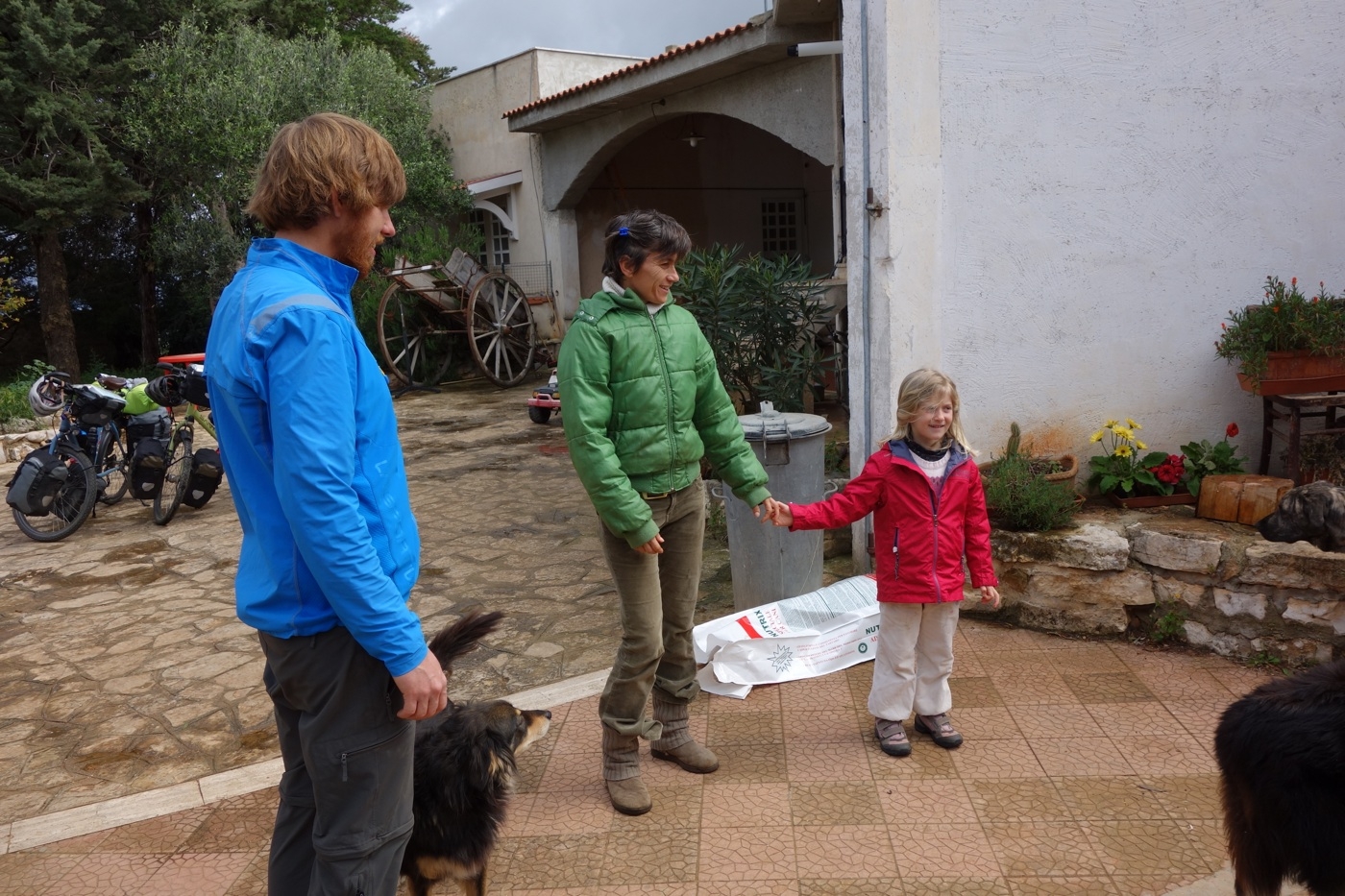