Shiraz, Yazd and Isfahan; a journey south without Mojo and Isaba

Home/Ancient civilizations, Central-Southern Iran, Heat and desert, Iran/Shiraz, Yazd and Isfahan; a journey south without Mojo and Isaba
Previous Next

Shiraz, Yazd and Isfahan; a journey south without Mojo and Isaba

The days sorting out our visa in Tehran were stressful and hot. Somehow it all worked out very well for us and in two days of searching for embassies we had the visa we needed. If you wonder how and what, please read our post “Iranian and Central Asian visa Information”.

Reading travel blogs of other travellers we have always been intrigued by visiting the south of Iran. We knew that on our current visa we wouldn’t have enough time by bicycle and also it is very hot and dry in the south now. So we had decided on a journey south without Mojo and Isaba going south with busses to Shiraz, Yazd and Isfahan. Leaving Mojo and Isaba behind at our Warmshowers host was okay, as we had not had a break in a while. We took an overnight VIP bus from Tehran bound for Shiraz, a 13 hour ride. VIP busses are a bit more expensive, now looking back it was the right choice for this ride because it made our night more comfortable.

Shiraz, a city we had only read and dreamed about was now real! We arrived around 8 o’clock in the morning and found a hostel we had read about on Trip Advisor called Golshan Hostel. It was a very nice place with a courtyard, a relaxed atmosphere and nice double room. In this hotel we chilled for a few days and met with two French guys, Camille and Etienne, a German couple, a Dutch Belgian couple, an Iranian French couple and we met up with Robin again who we had met before in Tehran. He had left most of his money in Tehran, as you can read on his blog www.robin-unterwegs.com, so we could save his money situation 🙂 Robin also told us that a visa extension in Isfahan was not possible anymore. He had only two days left on his visa and had to leave Isfahan early for Shiraz to extend, which finally worked out. We would run into most of these people we met again in Yazd and in Isfahan.

Shiraz is known for the ancient city of Persepolis which is nearby. We took a taxi together with the French guys and had a nice morning walking around in the very sunny ancient remains of the Achaemenid Empire. This Empire was built around 500 years BC. According to Lonely Planet: “In its heyday Persepolis spread over about 125 sq km and was one of four cities at the heart of an empire that spread from the Indus River to Ethiopia. Its original name was Parsa and the first known reference to it by its Greek name of Persepolis – meaning both City of Parsa (City of Persia) and Destroyer of Cities – came after its sacking by Alexander the Great’s army in 330 BC. The city was destroyed in 330 BC during his visit. One of the bas-reliefs records the nations of the time, ranging from the Ethiopians to, among various other peoples, Arabs, Thracians, Kasmiris, Parthians and Cappadocians, up to the Elamites, Egyptians and Medians.”

Back in Shiraz we visited the bazar and walked around in the streets saying hello to a lot of people 🙂 The next morning we tried to extend our visa which was not possible because we had too much time left on our visa. We were advised to extend in Yazd. We had some nice evenings together with the other people in the hostel and it was nice to socialise and talk about Iran and all the travels. We ate a lot of watermelon to keep our fluid levels up because also here it was hot.

It seemed most people had the same itinerary of visiting Shiraz, Yazd and Isfahan. We took another night bus to get to Yazd arriving at 5 in the morning being shaken and stirred, stayed at a hotel which was not so nice (Kourosh Hotel), met up coincidentally with the French guys again while eating at the Silk Road Hotel and switched to the Orient Hotel which was much nicer. The German couple was also there 🙂 In Yazd we enjoyed just being there, walking around in the golden brown winding streets, looking at the very pretty mosque with its minarets and strolling down the main street to find watermelon. The people were very friendly and interested. We took some time in Yazd to edit our latest videos and upload them to the website. Also we were able to arrange our visa extension in Yazd. We were nervous because we heard it could be difficult and take time. The office was easy to find and the people were very friendly and helpful. Because of the holiday days they could help us and extend our visa the same day. So we didn’t have to wait. Also it was no problem here that we had too many days left on our visa. We got a 30 day extension from the expiry date of our visa. So two weeks more than we asked for! 🙂

We decided to skip the night bus this time and take a normal bus to Isfahan. It was the end of Ramadan so we knew Isfahan was going to be busy. What we hadn’t expected was that all hotels were full. We had tried to find a host with Warmshowers but also not successful. So we ended up at Amir Kabir, a place people would want to avoid. We didn’t think it was that bad. We had only hoped for a nice place to relax before heading back to Tehran and that was not really the case. When we entered the garden we were surprised to see the French guys again! We thought they would be staying at a Couchsurfing host but that didn’t work out.

Isfahan has some very pretty and interesting sites with a lot of history. We visited: Naqsh-e Jahan Square, Masjed-e Jameh mosque, Masjed-e Shah mosque, Bazar-e Bozorg, Abbasi Hotel and the Pol-e Si-o-Seh bridge over the river that contains no water anymore. We had some interesting conversations with people while visiting a very local small restaurant. Martin had his first beryani (mutton meat and offal that is ground or minced and then cooked over coals before being sprinkled with cinnamon and served wrapped in flat bread) and Susanne had a very delicious meat kebab. We spoke with a small family of which the man was English teacher and he was very happy to share his lunchtime with us. Also we spoke with a family of which part of the family lived in England and were here on holiday. It is nice because they are more used to western customs and also more open when questions are asked by Susanne. At one point the whole restaurant was looking at us, interested in who we are and what we do. There was a whole group of girls at one table who were waving and chatting about us. It feels very surreal and also a little bit strange 🙂

The hotel advised us to go to Soffeh Mountain because it would be cooler and it would be nice with a lot of food places. We, together with the French guys, thought, why not. So we jumped in a taxi at around 20:30 only to be at the location around 22:00. It was amazingly crowded with Iranians celebrating their holiday. We made our way up with a cable care which was quite nice and it was actually quite cool on the mountain but really expensive to eat there. Everbody was looking at us, we are getting used to that by now here in Iran, and saying: ‘hello’, ‘how are you’, ‘where are you from’, ’what is your name’, ‘photo?’. We almost are starting to feel like famous people 🙂 We had a funny and strange evening about but it was good to see how the Iranians celebrate their free time.

From Isfahan we wanted to head back to Tehran but because it was Friday (Iranian Sunday) and end of the long weekend all busses were fully booked to Tehran. The French were heading to Toudeshk Cho in the desert and we didn’t want to say goodbye just yet. The home stay there is run by Mohammad who used to host a lot of cyclist when the road to Pakistan was still open. Now he mainly has people without bicycles staying with him. We took a car out to the desert to see the sun set which was very nice. There was a strong wind so we had sand everywhere. It was a nice was to end our short holiday to the south of Iran.

We said goodbye to the French guys, Camille and Etienne. It was nice to travel a few days with like minded people. We experienced this during a conversation about people and their differences in the world and noticed that we have quite a similar open minded view, which was nice to experience.

Now we are back in Tehran. We were welcomed very warmly by a lady at our hosts place. When we stepped in the door she said: “I know you already, we have been following your website!”. She was very excited 🙂 When she arrived at our hosts place with her husband they were surprised to see our bicycles because they had been reading on our blog but hadn’t read the latest yet. It was really nice to hear that people actually read what we write 🙂 They also have a blog from the last 13 months on the road www.bepitha.ch. We had a nice evening coming back at Saied and Nazi’s place. Robin was also there to arrange his last visa and Nazi cooked some really nice traditional Iranian eggplant dish.

We are getting ready to get back on the bicycle. This will definitely be a bit tough to find our rhythm again. We will be heading to Mashhad with a little bit of a northern route to see if we can find something else than desert before heading to the Turkmenistan desert. Looking back it has been a good decision to go by bus because the south was very dry with long distances in between cities and villages. It would have been very tough in this time of year. It was very nice to have a short holiday of the bikes and now Central Asia is very close. 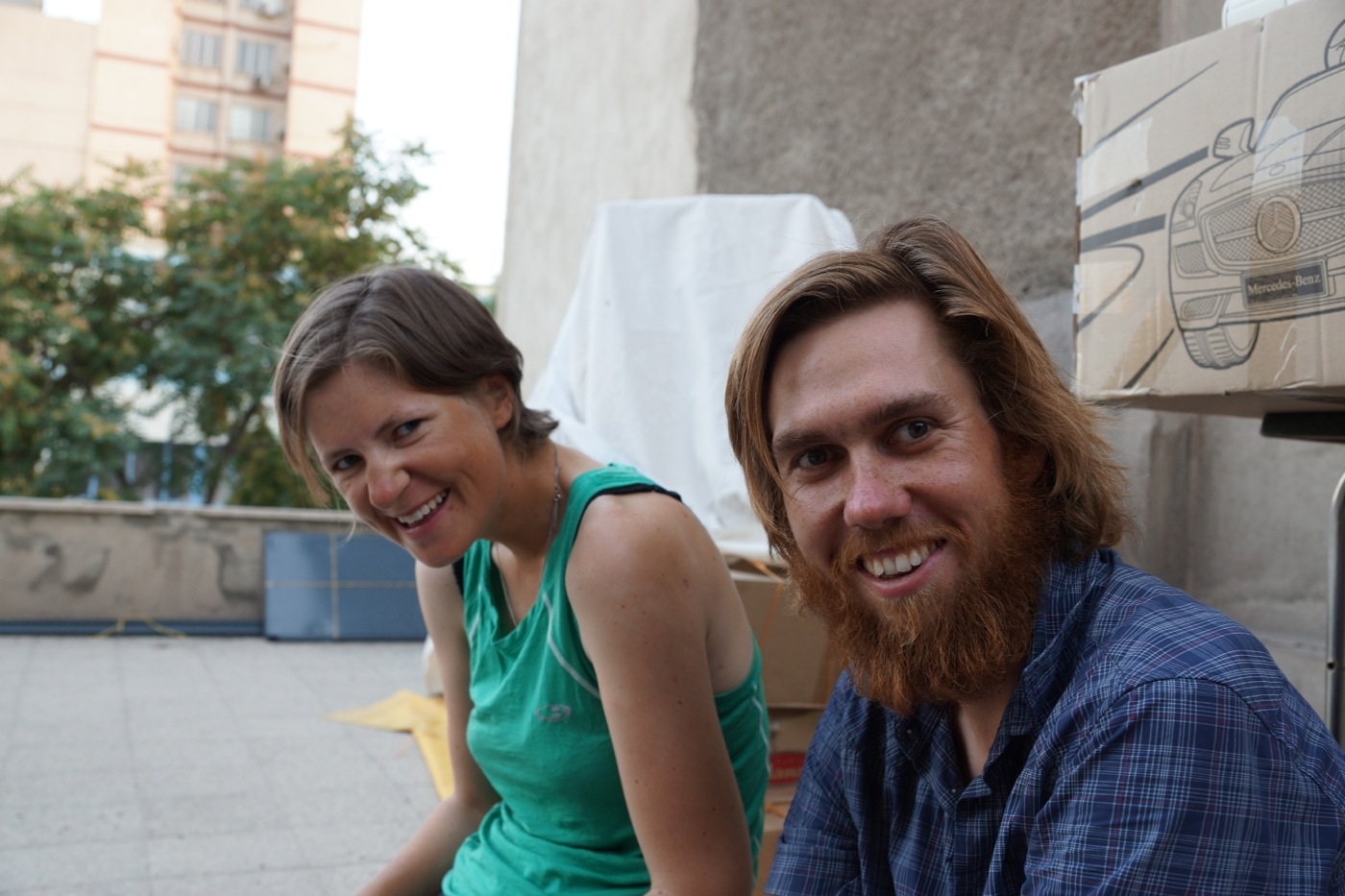